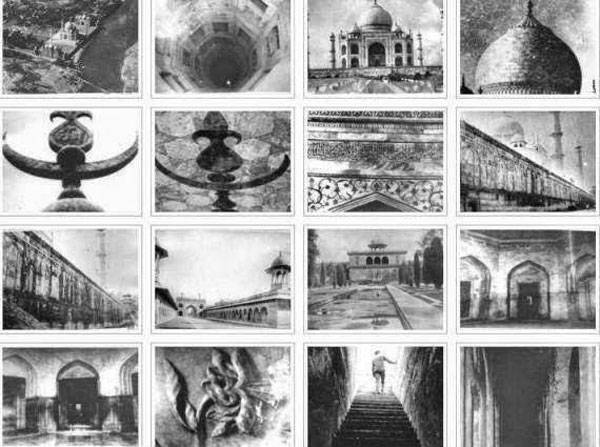 The word ‘Mahal’ refers to a palace and not a tomb. In none of the muslim countries around the world from Afghanistan to Algeria is there a building known as “Mahal”. Both the words, ‘Taj’ and’ Mahal’ are of Sanskrit origin.

The popular notion that Taj Mahal derives its name from Mumtaz Mahal, holds no water since firstly her name was Mumtaz-ul-Zamani and not Mumtaj Mahal, and secondly one cannot omit the first three letters “Mum” from a woman’s name to derive the remainder as the name of the building. Also, since the lady’s name was Mumtaz (ending with ‘Z’) the name of the building would have been Taz Mahal, and not Taj (spelled with a ‘J’).

Hindu temples are often built on river banks and sea beaches. The Taj is one such temple built on the bank of the Yamuna River, an ideal location for a Shiva temple.

At the backside of the river bank is a Hindu crematorium, several palaces, Shiva temples and bathings of ancient origin.

One needs to remove the shoes before climbing the marble platform. This custom originates from pre Shah Jahan times when the Taj was a Shiva Temple. If it were a tomb, shoes need not have to be removed because shoes are a necessity in a cemetery.

There are 12 Jyotirlingas in India. The Tejo Mahalaya or The Taj Mahal seems to be one of them known as Nagnatheshwar since its parapet is girdled with Naga or Cobra. Vishwakarma Vastushastra has a mention of ‘Tej-Linga’ that was consecrated in the Taj Mahal or Tejo Mahalaya.

Agra has been an ancient centre of Shiva worship. Its residents have been, for ages, worshipping at five Shiva shrines especially during the month of Shravan. However, since the last few centuries they had to be content with worshipping at only four prominent Shiva temples viz., Balkeshwar, Prithvinath, Manakameshwar and Rajarajeshwar. They had lost track of the fifth Shiva deity which their forefathers worshipped. Apparently the fifth was Agreshwar Mahadev Nagnatheshwar i.e., The Lord Great God of Agra, consecrated in the Tejo Mahalaya.

Shah Jahan’s own court chronicle, the Badshahnama, admits (page 403, vol 1) that a grand mansion of unique splendor, capped with a dome (Imaarat-a-Alishan wa Gumbaze) was taken from the Jaipur Maharaja Jai Singh for Mumtaz’s burial, and the building was known as Raja Man Singh’s palace.

The ex-Maharaja of Jaipur retains in his secret personal `KapadDwara’ collection two orders from Shah Jahan dated Dec 18, 1633 (bearing modern nos. R.176 and 177) requisitioning the Taj building complex. It was such a blatant usurpation that the then ruler of Jaipur was ashamed to make the document public.

Babur himself refers to the Taj in his memoirs as the palace captured by Ibrahim Lodi containing a central octagonal chamber and having pillars on the four sides. All these historical references allude to the Taj 100 years before Shah Jahan.

Tavernier, a French jeweler has recorded in his travel memoirs that Shah Jahan purposely buried Mumtaz near the Taz-i-Makan or the ‘Taj building’ where foreigners used to come so that the world may admire.

A Sanskrit inscription dated 1155 A.D, wrongly termed as the Bateshwar inscription, and preserved on the top floor of the Lucknow museum, refers to the raising of a “crystal white Shiva temple so alluring that Lord Shiva once enshrined in it and decided never to return to Mount Kailash”. The inscription was removed from the Taj Mahal garden on Shah Jahan’s orders. It was originally installed in the Taj garden before being uprooted and cast away at Shah Jahan’s command.

Hindu ornaments and symbols were removed from Taj Mahal. There are sealed chambers in Taj Mahal that hold the remnants of the erstwhile Shiva temple, including a Shiva Lingam.

Apparently those doorways originally sealed by Shah Jahan have been since unsealed and again walled up several times. In 1934 a resident of Delhi took a peep inside from an opening in the upper part of the doorway. To his dismay he saw a huge hall inside. It contained many statues huddled around a central beheaded image of Lord Shiva. It could be that, in there, are Sanskrit inscriptions too.

A wooden piece from the riverside doorway of the Taj was subjected to the carbon 14 test by an American Laboratory. It revealed that the door was 300 years older than Shah Jahan.